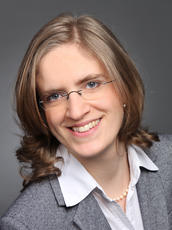 Prof. Dr. Britta Freitag-Hild has been working as a Professor of English Didactics at the University Potsdam since October 2014. She studied English, German and Music at the Justus Liebig University in Giessen. After her first state examination for teaching at grammar schools, she worked as a research assistant in English Didactics and Literature at the Justus Liebig University from 2004 to 2008. As doctoral student of the International “Giessen Graduate School for the Humanities“, she graduated in 2009 with a thesis on the use of Black and Asian British Literature and Film in the English lessons to encourage inter- and transcultural learning. She was awarded the faculty prize of the Justus Liebig University Giessen as well as the Hans-Eberhard-Piepho-Preis for Research in English Didactics in 2011 for this thesis. From 2011 to 2014 Britta Freitag-Hild worked as a secondary school teacher at a grammar school in Giessen. She then took over a deputy professorship in English Didactics during the summer term 2013 at the Justus Liebig University Giessen. Her fields of interest are foreign language literature and cultural didactics, in the fields of Black and Asian British Literature and Films, inter- and transcultural learning, task and competence orientation as well as the empirical study of teaching. Currently, she is involved in the development and research of task formats for generic learning to encourage communicative competences of foreign language learners.