Since the early nineties, John Hudson worked as a comedian and improv artist in New Zealand and many European countries. With the “Shenanigan Brothers” and the “Kiwi comedy show” he performed at the Cologne Comedy Festival. As writer and director, he directed unconventional Shakespeare adaptations, children’s plays and musicals. He was busy in New Zealand as a comedian as well as a theater actor and director. Since the early nineties, John taught as a teacher of improvisational comedy and technique in New Zealand and Germany. He worked at the Cologne Comedy School as a teacher and director of showcases and, with his extensive knowledge and many years of experience, he has supported many established artists in their infancy. Since 2004 he was one of the most sought-after consultants and coaches for TV productions, including “Schiller Street”(Sat.1), “RTL Comedy Nacht ” and “Frei Schnauze” (RTL), “Thank God” (Pro7) and trained prominent comedians like Barbara Schoneberg, Mario Barth, Max Giermann, Martin Schneider, Janine Kunze, Mirco Nontschew, Hennes Bender and many others. (Source: John Hudson’s Website)In his Impro Comedy Shows John uses techniques that help people learn and understand English in an entertaining and funny way.  Using audience participation John creates a hilarious 90 minute fun packed adventure using up to 20 members of the audience as active performers.  The show involves storytelling, comedy, visual gags, and sound effects. We’ve prepared a few extracts for you.

Impressions of his show at Leuphana University: 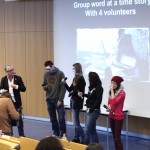 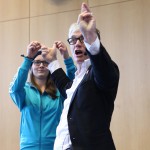 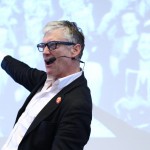 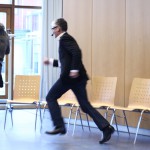 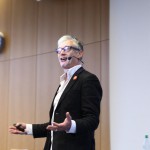 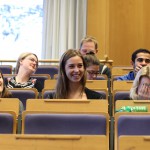 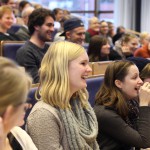 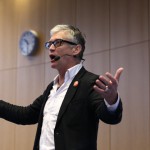 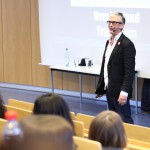